I was there in 2013.  I had finished the race 45 minutes earlier and was walking back to the finish line area with my camera to take photos of my sister finishing her first Boston Marathon, but the bombs stopped her just before the last turn onto Boylston.  I was walking up the sidewalk on the other side of the finish line press bridge when I heard the first bomb explode and instantly felt the shock wave hit me.  I looked up the sidewalk and all I could see was a huge cloud of smoke on the other side of the bridge. It was a close call and very traumatic for both of us, but we both went back in 2014.

She returned to complete the race and I returned as a spectator to watch the race at the finish line and take photos.  A memorial exhibit was held that year displaying all the items left by people at the locations where the two bombs exploded the prior year, and it was an emotional time for everyone who was there.

It's the only year I've been there as a spectator, but I couldn't have picked a better time. Meb Keflezighi became the first American man to win the race in 30 years with a time of 2:08:37 and Shalane Flanagan set a new course record for an American woman, finishing in 2:22:02.

The first set of photos below were taken at the memorial exhibit followed by a few of the photos I took at the finish line that year.

Scroll down to view the photos.

(Select "Show More" at bottom of each page)

Back to Main Photo Page 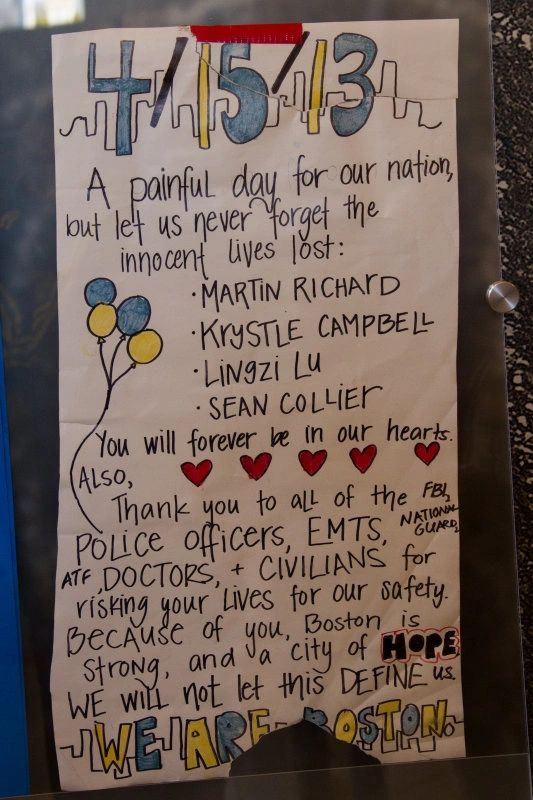